Southborough pupils have been very busy creating stunning artwork for the Discovery Centre. Have a peak at what we have been doing recently.

We are very excited to have a brand-new 3D printer in school!  Pupils have been learning all about 3D design and 3D printing this term and have had the opportunity to create a 3D leaf using Tinkercad software. The 3D leaves created by the children form part of a larger art installation displayed in the Discovery centre. Have a look at the images below which show how the leaves are created using Tinkercad and the stunning finished result! 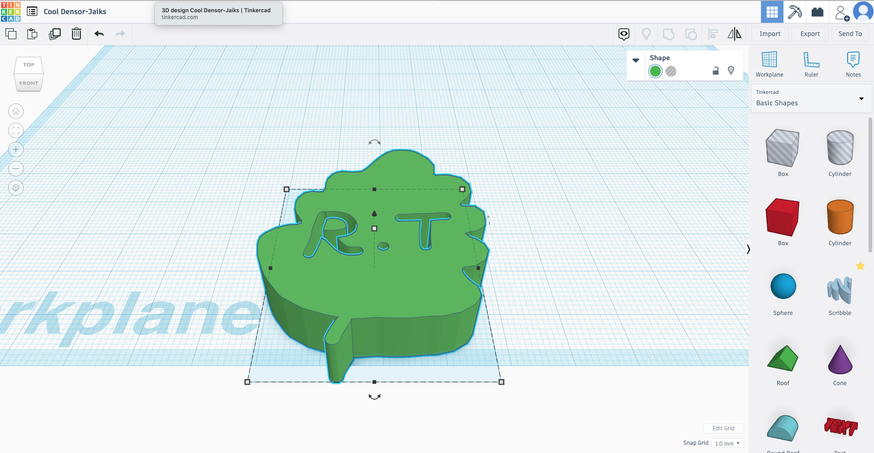 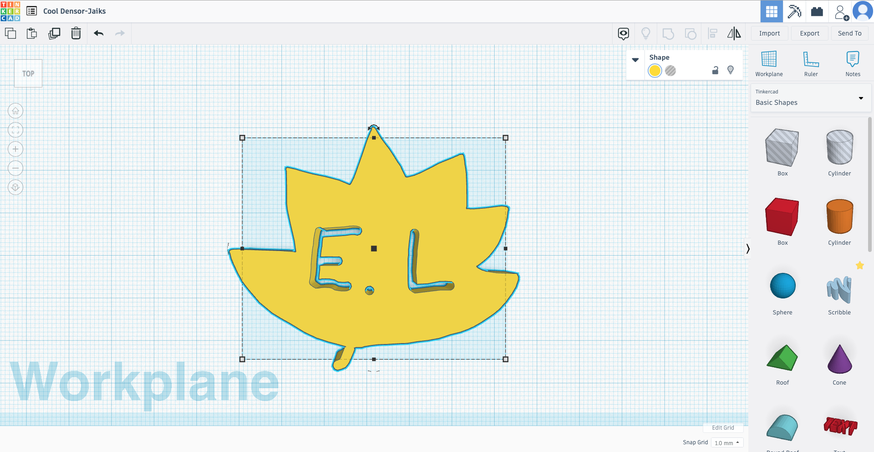 Our pupils have been very busy creating beautiful artwork for the new Discovery Centre. The artwork created was inspired by the book Blast Off into Space with Mae Jemison.

Lana – “It was so much fun – we had to make alien spaceships and they even had googley eyes.  Don’t worry, they weren’t scary!”

Ravi – “We read a special book about a real life astronaut called Mae Jemison.  She wanted to be an astronaut because she loved science.  I love science too. I don’t think she saw any aliens though.”

Jamie – “It was really fun making the spaceships.  I made an orange alien and there were lights on the spaceship!”

Rosie – “We got to do art all afternoon and it was really fun because I love art.” 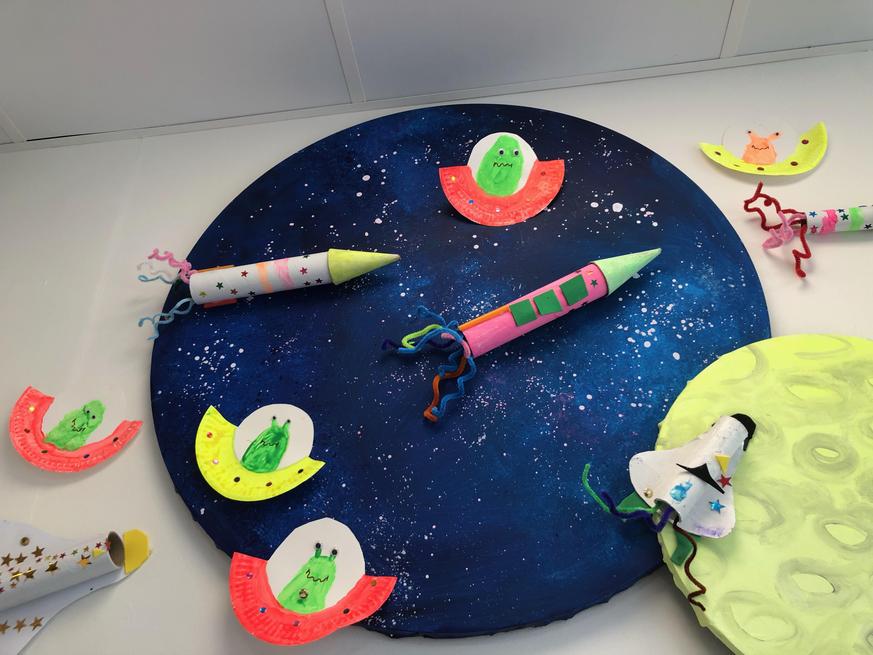 Yr2 pupils have been busy creating collages using painted papers to make artworks inspired by the story The Best Book in the World By Rilla Alexander for the Discovery Centre. If you found the best book in the world, would you stop reading? Could you stop reading? If you had homework to do, or dinner to get through, could you put the book down? On a train to the zoo or on a flight to Kalamazoo, would that break the spell? If in a forest you walked, while scary monsters stalked . . . would that be enough? If you'd crossed a desert that baked or were swept off by a river that snaked, would you even take a break? . . . would you put the book down? What could possibly be so good about a book? Rilla Alexander's story is conveyed through her superb artwork making this an unforgettable and magical tale that encourages children to read. Pupils have developed their skills in mark making techniques and composition to create these stunning collaged artworks.

Yr3 pupils have been busy creating a large collaborative art installation inspired by Miranda Paul’s One Plastic Bag.This book is based on the true story of Isatou Ceesay who saw the problem that the proliferation of plastic bags was causing in her country, the Gambia, contaminating the environment and killing the goats that swallowed them. She collaborated with other local women to crochet thread made from the plastic bags to create purses resulting in a thriving trade and reducing pollution.

“We read a book called One Plastic Bag by Miranda Paul. It was about an African lady who found lots of plastic bags littered about. She decided to make them into something useful and stitched them together to make wallet and purses. We also used recycled plastic bags in art. The bags were cut into strips. We took the colourful strips, cut them into different shapes and stuck them to a large square to make African patterns. Mrs Clements then ironed them together. Next, we drew leaf shapes onto the patterned collages and cut them out to make a class mobile. This now hangs in the Discovery Centre. It was fun to make the leaf shapes, but we had to be very careful cutting them out. If they were too flimsy, we couldn’t hang them up.” 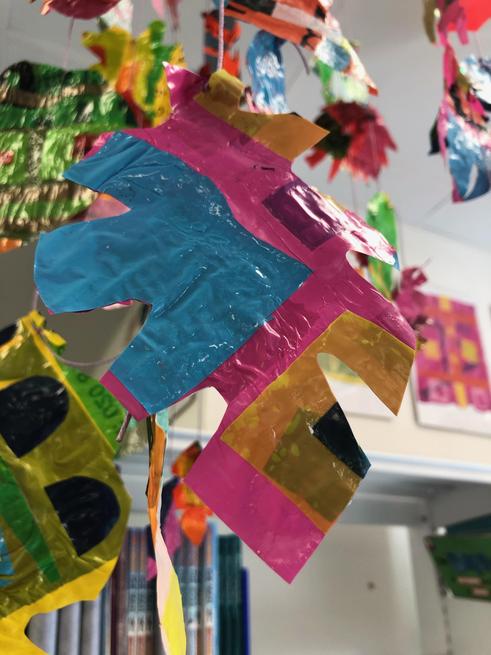 Yr4 pupils have been busy creating a large collaborative collage inspired by Victoria Antolini’s illustrations for The Real Boat. Pupils used inks, watercolours and mark making techniques to create their ‘sea’ papers and used their drawing observational skills to create silhouettes of the different types of boats that appeared in the story.

"We read the book The Real Boat which inspired us to create some artwork for the discovery centre. We made sea papers and little boats. We used lots of different techniques when creating the colour for our waves, inks were the most fun but they were quite messy. We made silhouettes of boats out of painted black card, which were then placed onto the waves we had made earlier. It was really great fun and it looks amazing on the wall in the discovery centre".

Y5 pupils have been busy combining art and science (STEM) this term and were challenged to make electronic art-bots! Pupil used their scientific knowledge of circuits and electricity to make a moving art-bot. Pupils fitted their art-bots with coloured pens which created large artworks inspired by the abstract expressionist Jackson Pollock.

‘We made Art-bots! First of all, we got a plastic cup and stuck four colouring pens to its side with electrical tape. Next, we wrapped an elastic band on a battery then we stuck it to the top with electrical tape. Then we did the same with the motor, but we stuck it on the side at the top, so the metal rod stuck above the cup. After that, we connected the motor and battery with wire’. Sophia P, Durham 5

‘In art, we had to build a robot which creates abstract art. First, Scarlett and I got a cup and put four pens at the bottom and these were the legs. We put celotape around them so they stuck. We put a battery at the top and put an elastic band around it. After that, we put the motor on and hooked the wire onto the motor. Finally, we put some playdo on the motor and attached the wire to the battery. The robot started to draw! It was based on Ada Twist Scientist by Andrea Beaty. We had to work out how to get the robot to move like Ada Twist works things out’. Beau, Northumberland 5

The children's art-bot artworks were inspired by illustrations found in the story Ada Twist Scientist by Andrea Beaty.  This fantastic book was the catalyst behind this exciting STEM project. In the story, Ada is constantly trying to find the answers to scientific questions and problems. 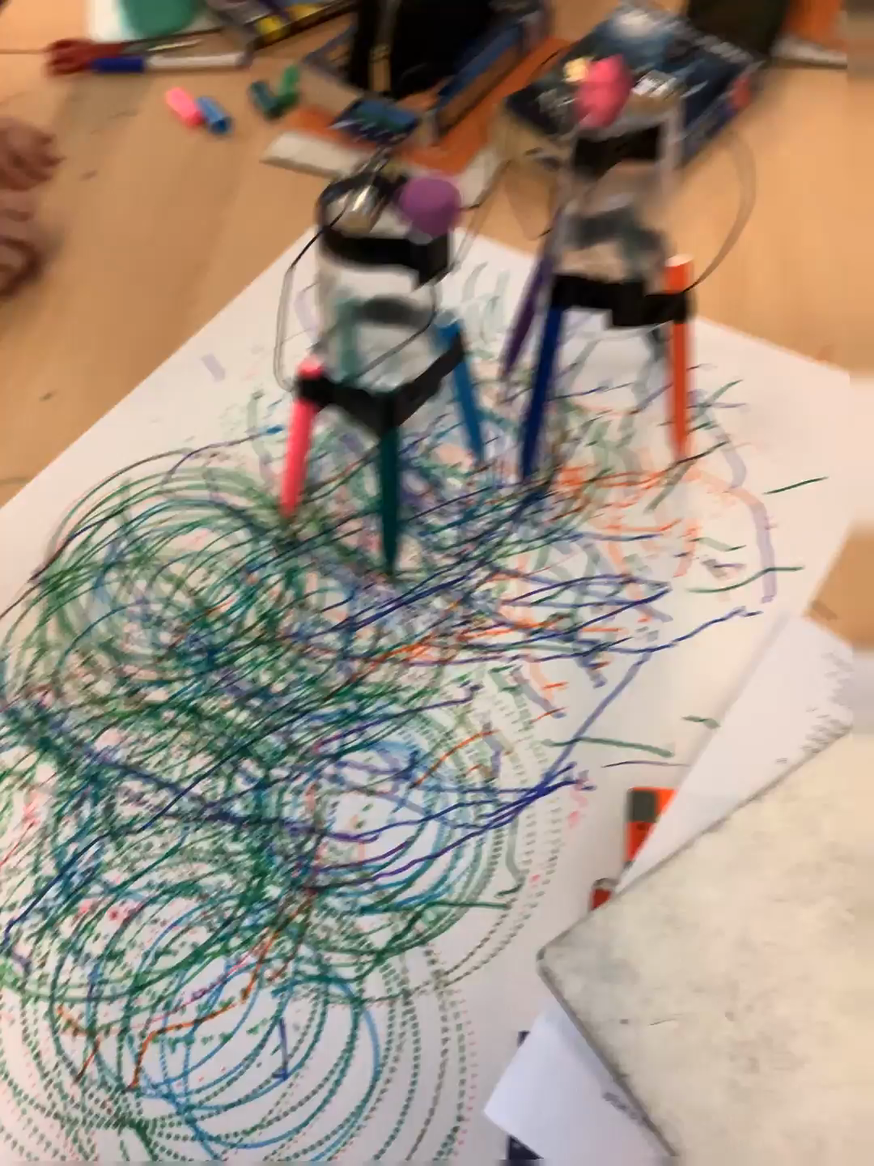 Year 6 pupils have been very busy creating beautiful 3D artworks inspired by the ‘Story Show Way’ by Jacqueline Woodson. This picture book - with intricate illustrations inspired by the traditions of quilting - imagines how family history is passed down in ways which inspire courage and hope.

A parent pieces together the story of her child's ancestors, with scraps of memory reaching back to the time of slavery when quilting - like storytelling - was akin to a secret survival skill passed from mother to daughter. Pupils combined art and maths to create individual geometric freedom quilt squares for a large collaborative quilt artwork.

In the last week of last term Year 6 spent Thursday and Friday working on an Art project based on a book called ‘show way’ written by Jacqueline Woodson. The book is about a seven-year-old girl in slavery who learns how to sew quilt covers and then teaches her daughter, who teaches her daughter, who teaches her daughter and so on. The quilts represent freedom and each quilt square has a different meaning. In our project, we each made one quilt tile for a year group display that will hang in the Discovery centre: a legacy for the school when we have left Southborough. Firstly, we painted our base - each class had a different colour to paint it with. Next, we chose the design we wanted to use. There were so many to choose from including Flying Geese, Flying Geese, North star and Log Cabin. After choosing our colour scheme, we then cut out our shapes on cardboard and arranged them. When we were happy with the shapes, we painted them. Each class had three colours to use so it didn’t become too complicated. Lastly, we stuck the shapes onto the card board base and then it was done. We look forward to seeing the whole quilt when it is hanging on the wall and the theme of passing down the generations will be complete. 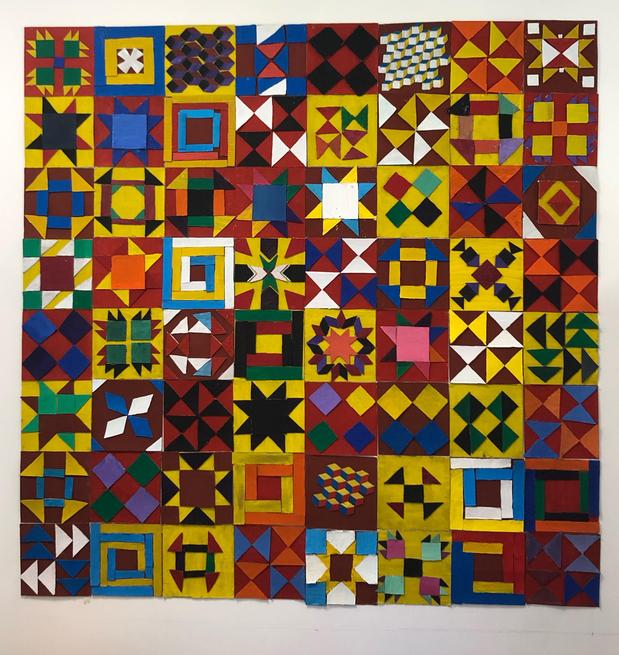 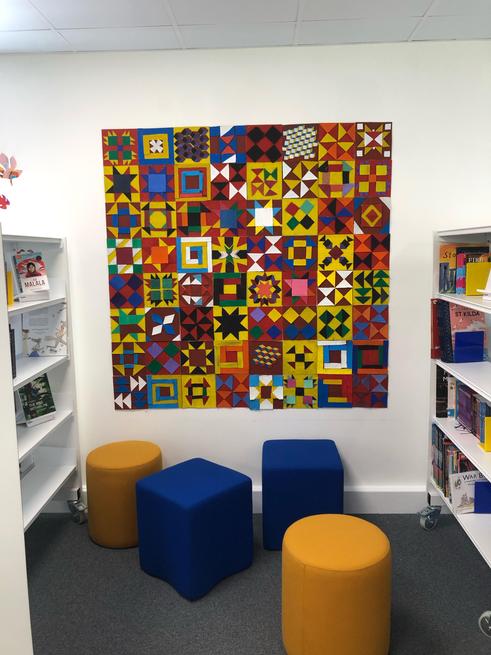